Groundwater has been affected by chemicals originating from a hazardous waste disposal facility. There are over 500 wells in the site’s four operational zones, and over 460 of these wells, including extraction wells, have recently been monitored as part of site groundwater monitoring programs. Groundwater monitoring optimization, including geospatial methods, was conducted to identify a spatially efficient network that minimizes both uncertainty and redundancy.

The site is a former Class I hazardous waste disposal facility that operated from the 1950s through 1970s, in which more than 34 million gallons of industrial waste were placed in evaporation ponds located at the facility during that period. The wastes consisted primarily of metal finishing waste products, solid propellants and explosives, electroplating materials, and pesticides. Several hundred groundwater monitoring and extraction wells have been installed at the site since the early 1980s. Contaminants in soil and groundwater at the site include volatile organic compounds (VOCs), semivolatile organic compounds (SVOCs), pesticides, perchlorate, n-nitrosodimethylamine (NDMA), 1,4-dioxane, para-chlorobenzene-sulfonic acid (pCBSA), salts, and heavy metals including cadmium, nickel, chromium, copper, manganese, and zinc. Groundwater in portions of the disposal area is highly acidic, with low pH values (below a pH of 1).

As a result of waste disposal practices, groundwater was affected by various contaminants that have migrated from the original disposal area approximately five miles southward to the vicinity of the river. Private water supply and irrigation wells have also been affected. The primary chemicals of concern, which currently consist of perchlorate, TCE, and chloroform, have been detected in alluvial, weathered bedrock, and bedrock aquifers. The site has been divided geographically into four groundwater zones, considering various site operational and remediation activities. Various remedial systems have been installed and are operational in the four zones, from the original disposal area to the downgradient plume.

Groundwater sampling at the site began in 1995. The groundwater monitoring network has expanded significantly over the years since monitoring began. At the time of the optimization analysis, groundwater results from 420 monitoring and observation wells and piezometers were analyzed. Sampling has been conducted on an approximately semiannual basis, with other additional sampling dates throughout the time period of the data set. Data evaluated spanned the time interval of April 1995 to December 2011. Concentrations of three contaminants were used for the analysis: chloroform, perchlorate and TCE. Over 3,400 specific date/well records were considered in the analysis.

As a second step in the optimization process, the groundwater monitoring network was quantitatively evaluated using statistical methods primarily for temporal and secondarily for spatial analysis, as well as graphical analysis using time-series charts of perchlorate and TCE concentrations. The primary chemicals of concern (perchlorate, TCE, and chloroform) were statistically evaluated using available data for the 16-year monitoring period from April 1, 1995 to Spring 2011. This period was selected to incorporate a sufficient number of monitoring events for statistical analysis for most site wells, since many wells have not been included in every sampling event. MAROS (Version 2.2) was used to perform quantitative analyses for the Stringfellow Superfund Site, for monitoring, and for select extraction wells retained following the qualitative analysis. This program provided well-by-well concentration trend analysis, well-by-well sampling frequency analysis, well data-gap analysis, and plume-stability analysis based on spatial-moment analysis. The MAROS analyses were performed on 420 wells, and comparable records (the same or a similar temporal range of data) were used for both intrawell and interwell comparisons, where possible.

As part of the optimization analyses, site wells were designated as “source” or “tail” wells, which are defined as wells located within and downgradient of each groundwater plume area, respectively. Analyses were performed in two groups, one group for Zones 1 through 3 and a second group for Zone 4. Concentration trends were assessed using Mann-Kendall statistical methods (Figure 120). In general, these wells were selected as having sufficient data for analysis of at least one of the chemicals of concern, or were in an area considered important for the evaluation. Wells were further identified as being completed in the alluvium, weathered bedrock, and unweathered bedrock. 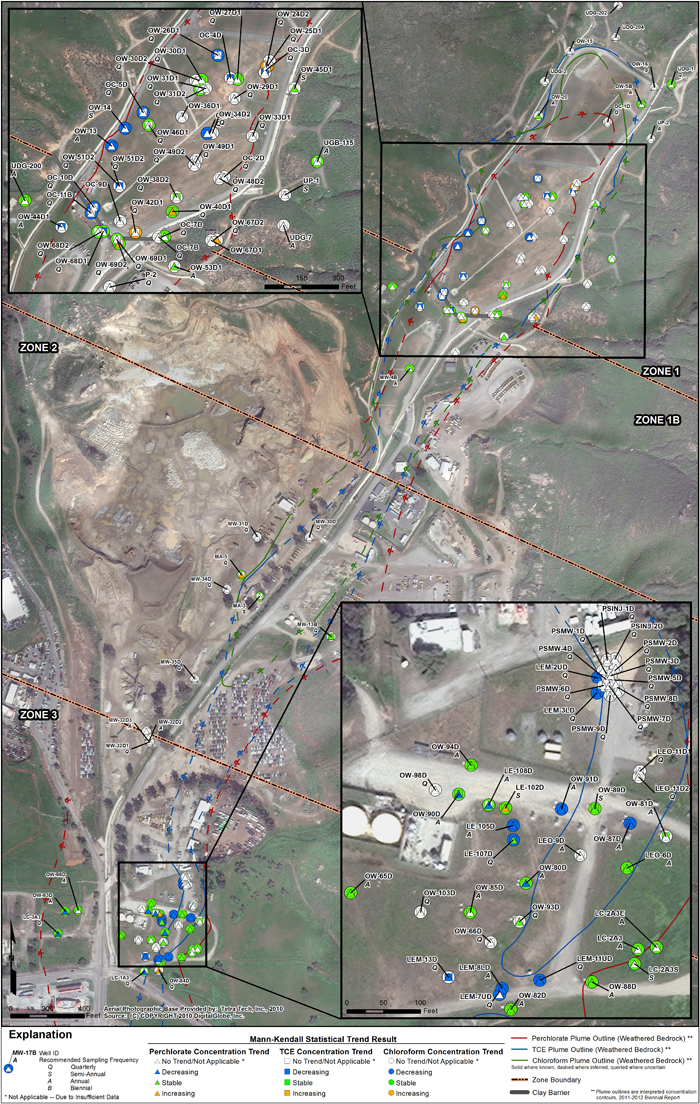 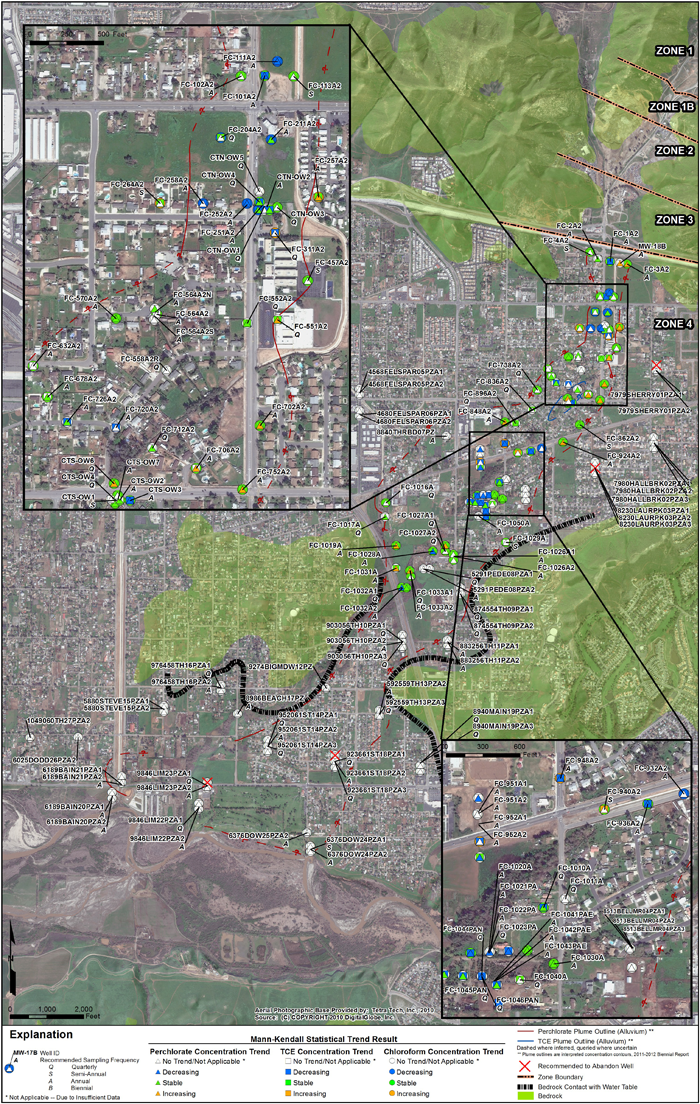 MAROS yielded recommendations for optimization by location (remove wells from future testing and/or abandon wells) and by frequency (decrease or increasing monitoring frequency). (Figure 121). These results were evaluated individually against rankings and qualitative evaluation results. MAROS frequency recommendations were generally disregarded because, for several reasons, they were not considered warranted to maintain an understanding of site conditions. These reasons include low sampling frequency (for example, due to lack of water), investigation-specific use for wells (for example, in-situ bioremediation pilot study) that were then intended for destruction, and recent data not included in the MAROS analysis that indicate a different concentration trends. A new version of MAROS was released following this evaluation, which has improved usability and partially remedied some of these issues. 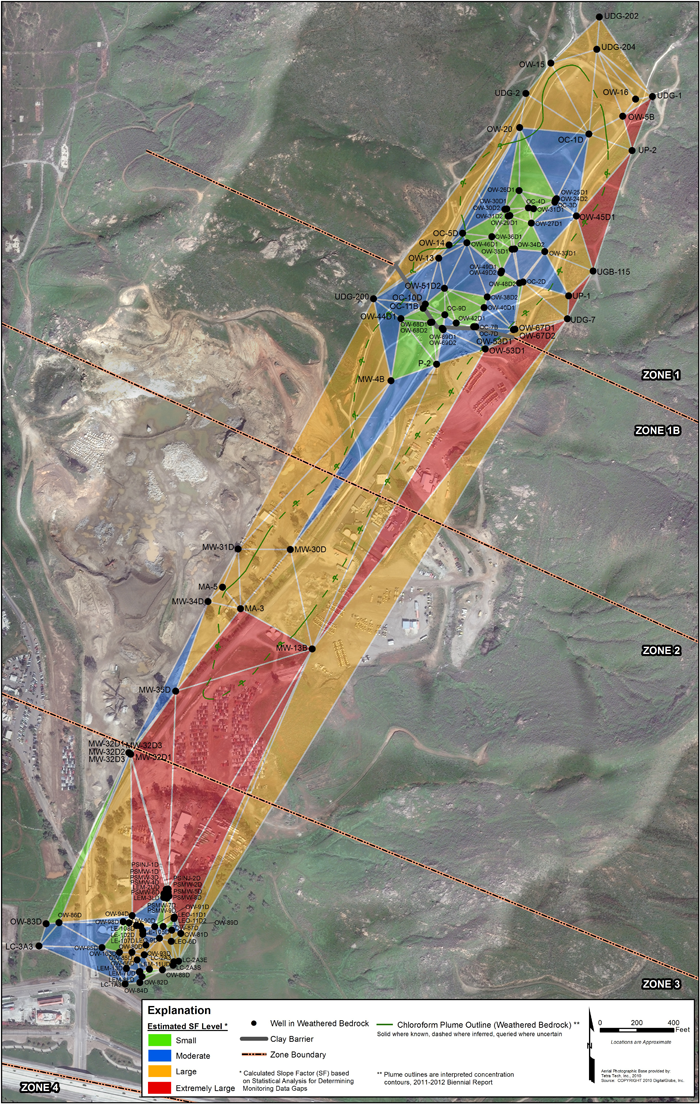 Figure 121.  MAROS results for chloroform in weathered bedrock in northern portion of the plume.

Some of the specific limitations encountered during use of MAROS include the following:

Spatial analyses were applied to a long, narrow plume primarily controlled by a narrow paleochannel and changing from a canyon environment to an alluvial valley, in addition to vertical transport among three different lithologic units. These conditions likely significantly affected the analyses. Although typically evaluated separately, the three lithologic units are hydraulically connected, with vertical hydraulic gradients affecting contaminant transport. The lesson learned is that complex systems may not be readily amenable to statistical analysis.

Another important technical issue with the statistical methodology is that the spatial analysis is directly affected by temporal changes in the distribution of monitoring points. For example, the addition of monitoring points that provide further plume delineation may result in MAROS concluding that the plume is expanding, although this may not be true. This issue may be partially addressed by only including wells in the analysis that have an identical monitoring period (starting date).