The former Army Nebraska Ordnance Plant (NOP) occupies approximately 17,250 acres near the town of Mead, Nebraska. During World War II and the Korean Conﬂict, bombs, shells, and rockets were assembled at the site. The site includes four load lines, as well as the Burning/Proving Grounds, a Bomb Booster Assembly Area, an Air Force Ballistic Missile Division Technical Area, and an Atlas Missile Area.

Wastewater with contaminants from both the load line plant operations and a laundry was discharged into a series of sumps, ditches, and underground pipes. TCE was released from various sources including the Atlas missile site. The site was placed on the USEPA National Priorities List (NPL) of Superfund sites in August 1990 because contamination was identiﬁed in groundwater and soils at the site.

The NOP site is located in the Todd Valley, an abandoned alluvial valley of the ancestral Platte River. The thickness of the unconsolidated material above bedrock in the Todd Valley at the site ranges from approximately 81–157 ft. The unconsolidated material consists of topsoil, loess (predominantly wind-blown silt), sand, and gravel of Pleistocene age. Three aquifers are present at the site: the Omadi Sandstone aquifer, the Todd Valley aquifer, and the Platte River alluvial aquifer.

Monitoring well locations at the site were established based on regional groundwater ﬂow, which is generally towards the south and southeast. The water-bearing portions of the unconsolidated material in the Todd Valley are divided into an upper ﬁne sand unit (12–17 ft thick) and lower sand and gravel unit (17.5–72 ft thick). The upper sand unit is overlain by 4–23 feet of Peoria Loess. Overbank silts and clays ranging from 10–17 ft thick overlie the Platte River alluvial sands and gravels. The water table surface in the Todd Valley slopes toward the south-southeast with depths to groundwater ranging from 6.6 feet to 58.0 ft below ground surface.

Primary contaminants in the identiﬁed groundwater plumes include trichloroethene (TCE) and explosive compound hexahydro-1,3,5-trinitro-1,3,5-triazine (RDX). Migration of these contaminant plumes is dictated primarily by the southeastward direction of groundwater ﬂow. Wider-spread groundwater contamination is found in the upper ﬁne sand units than in the sand and gravel units below. Lower contaminant concentrations are generally found in the deepest of the three aquifers.

Four groundwater contamination plumes were identified at the NOP site:

Site-wide sampling at the former NOP began in 1992. The monitoring network has expanded significantly over the years and at the time of the optimization analysis consisted of 257 monitoring wells, plus additional residential and production wells. Sampling had been conducted at various times during characterization and design, but since about 2002 has been generally conducted semiannually. Production and residential wells had, in some cases, been sampled quarterly. The data spanned the time interval of August 1992 to April 2008. Concentrations for seven contaminants were used: TCE, RDX, trinitrotoluene, methylene chloride, dinitrotoluene, trinitrobenzene, 1,2-dichloropropane. Over 2400 specific date/well records were considered in the analysis.

GTS was developed by AFCEC as a publicly available, freeware software application for conducting optimization of long-term groundwater monitoring networks (LTMO). During its development, GTS was tested at a number of Air Force and Department of Defense (DOD) sites, including the NOP site. GTS uses statistical tools and existing groundwater monitoring data to answer two key questions: (1) what is the optimal sampling frequency of monitoring? and (2) what is the optimal number and arrangement of sampling locations in the monitoring network? Unlike some optimization methodologies, GTS does not use fate and transport or other geophysical models of a site. Instead, it bases its optimization recommendations strictly on the statistical properties and patterns evident within the historical sampling data.

At NOP, GTS was applied separately to all three aquifer zones (shallow, medium, deep), with substantially different levels of spatial redundancy in each zone (termed a 2.5D analysis in GTS), using the two contaminant drivers TCE and RDX. By request of site regulators, 77 of the 250 distinct well locations were protected from optimization, meaning the data from those wells were used to prepare plume maps, but none of those particular locations could be ﬂagged as redundant. Of the unprotected wells, 46% in the deep zone were ﬂagged as redundant, 13% in the medium-depth zone, and 4% in the shallow zone. Figure 91 shows the monitoring wells flagged protected, critical, and redundant in the deep aquifer. 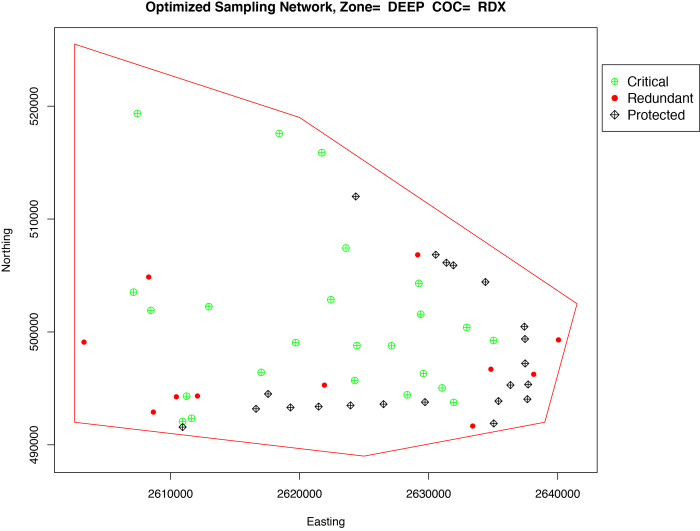 Figure 91. Optimized sampling network for RDX in the Deep Zone.

The monitoring well network was also analyzed to determine whether any new well locations should be added. GTS creates a map across each aquifer zone of the statistical uncertainty associated with all unsampled locations, then preferentially picks locations with high uncertainty and higher nearby contaminant concentrations. The software initially suggested 14 possible new sampling points, but since GTS cannot account for physical obstructions (for example, buildings) or other infeasible locations, only 10 new wells were ultimately recommended.

Iterative thinning was also conducted for all contaminant-well pairs having at least eight distinct sampling events in the data record in order to optimize sampling frequencies. The majority of wells in each aquifer zone were sampled semiannually (2Q) at the time of the demonstration. Iterative thinning suggested that adequate trend reconstruction could be done based on annual (4Q) sampling in two of the three aquifer zones, and every three quarters (3Q) in the remaining shallow zone. Overall, the GTS analysis recommended roughly half of the level of sampling effort that was currently being conducted at existing wells.

The results of the optimization analysis were input into the GTS cost-comparison calculator and are summarized in Table 12. Starting with a baseline of 250 wells and a generally semiannual sampling frequency, and given the typical ﬁeld sampling, mobilization, and laboratory costs associated with the NOP site, GTS estimated that implementing the optimal sampling plan would result in a net savings of 39% of the annual baseline program cost of $465K.

The Summit Envirosolutions tool was used to optimize the sampling network. After careful examination of data patterns, the project team decided not to attempt to perform a spatiotemporal optimization due to the irregularity and sparseness of the recent data. Various geospatial methods in the Model Builder tool were used to recreate the plume maps, including inverse-distance weighting and various kriging methods (quantile, log-transformed, ordinary). The aquifer was divided into shallow, intermediate, and deep zones, and each was analyzed separately. Quantile kriging provided the best recreation of the likely plume shape. Once the model interpretation technique was chosen and a base representation prepared, a genetic algorithm-based approach was used to explore other smaller monitoring networks and the kriged interpolation of the plume map using the selected wells was compared to the base map. Trade-off curves of error versus cost were prepared. TCE and RDX were linked in various ways in the analysis by limiting the either individual or combined maximum errors for the two contaminants in evaluating the various alternative sampling networks. The sampling plan with the largest acceptable error was chosen.

Five combinations of analyses were performed for each aquifer and are listed in Table 13. Only the results of the analysis of the shallow interval are discussed here, because they are representative of the intermediate and deep zone analyses.

Each of the approaches in Table 13 are presented in Figure 92. In each optimization run, the plan along the trade-off curve with maximum acceptable error is selected, as described in Table 13. 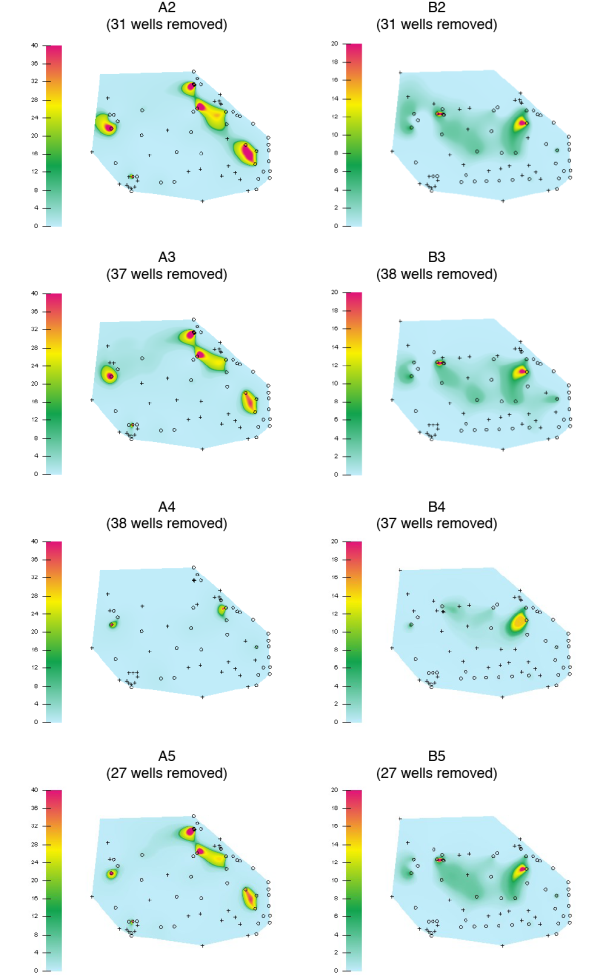 Figure 92. Comparison plume maps. The symbol “+” indicates wells that are recommended to be removed by the Optimizer, while the symbol “O” denotes wells to be kept.
Source: Harre et al. 2009.

A comparison of the plume maps is summarized in Table 14.

The most important result is that A4 and B4, where the wells recommended for removal based on one of the [contaminants] are then removed for the other [contaminant], result in poor plume interpolation. The reason [for this result] is that wells removed for one [contaminant] may be critical for accurate representation of a different [contaminant]. In approaches A2 and B2, where both [contaminants] are analyzed together, the resulting plume representations remain accurate. This process illustrates the benefit of performing the optimization with multiple [contaminants] using the combined error, rather than optimizing them individually. [The team] subsequently used approach A2/B2 (combined maximum error of TCE/RDX) for detailed spatial optimization analysis. Tradeoff curves (sampling cost versus error) for each [contaminant] were generated by the Optimizer tool.

Figure 93 shows, as an example, the resulting cost-error trade-off curve for the shallow aquifer. Figures 94 and 95 show the optimal plans with errors less than 1.0 for the combined TCE and RDX error. 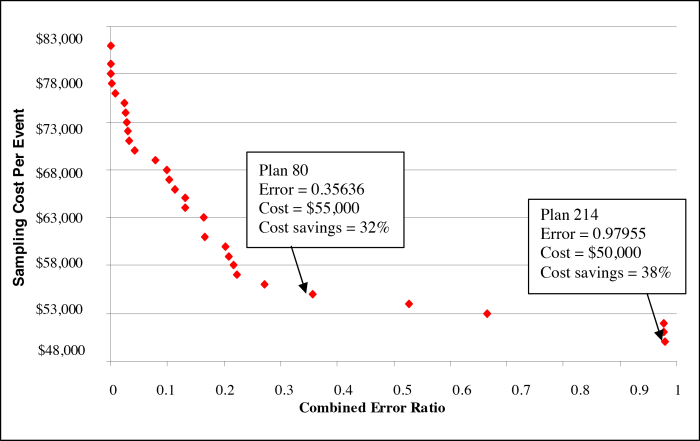 Comparing sampling costs (number of wells multiplied by $1,000 per sample) and errors on the tradeoff curve, and visually inspecting the plume maps for selected plans, Plan 80 and Plan 214 were both considered to be acceptable. [These plans were] both generally similar to the map with all sampling locations for both the higher concentration areas and the lower concentration areas. Of course, [the] site stakeholders will decide if either plan with reduced number of wells is acceptable.

Potential cost reductions were greater than 30%.

Summary of Comparison between GTS and Summit Envirosolutions

The GTS and Summit Envirosolutions monitoring optimization tools were both successful at identifying reduced monitoring programs that would be able to meet the objectives of assessing plume stability as an indication of plume capture/control at a lower cost.